Graphing the Rise of David Brat on Breitbart

The New York Times had an article saying that conservative voices influenced the victory of David Brat over Eric Cantor. So, we decided to dig into the data on the coverage of David Brat on Breitbart.com . 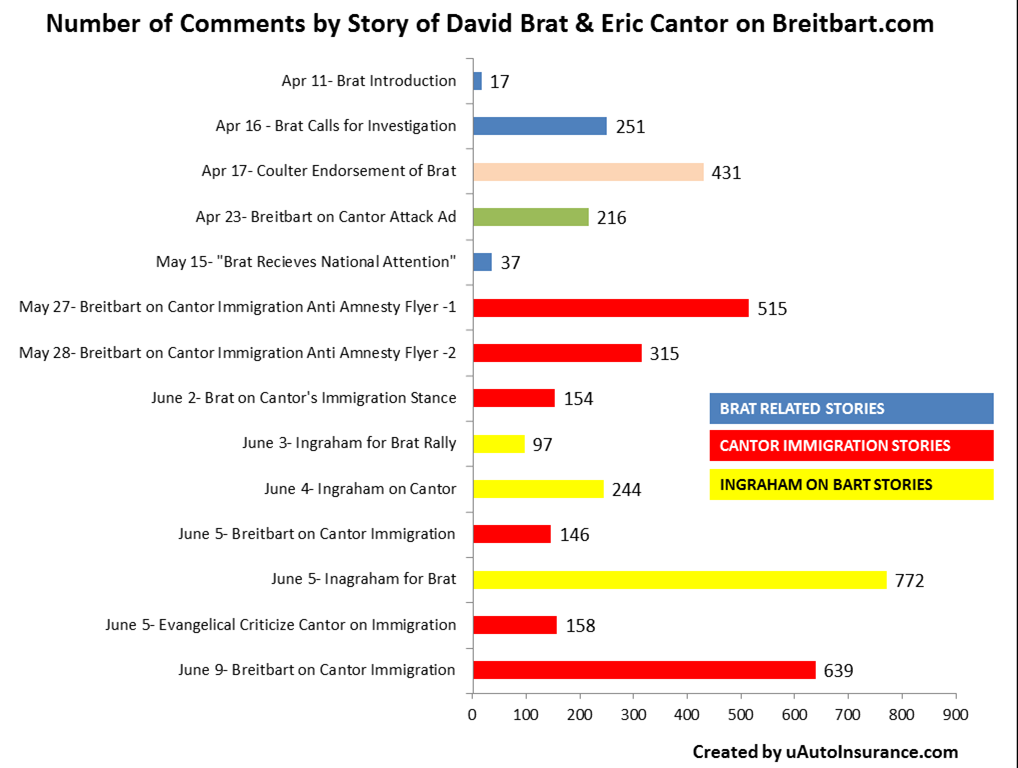 Our data & analysis shows that Breitbart wrote about 14 stories on the David Brat & Eric Cantor race from April 11th  to June 9th. The initial post introducing Brat to the community was on April 11 2014 which got only about 17 comments, possibly reflecting for the unknown reputation of Brat & also the election being some time away. However, the next post on April 16 of Brat asking for an investigation into the Executive Director of the Virginia Republican party received 251 comments.  The Coulter endorsement on April 17th led to an even higher engagement of 431 comments. There were only 5 stories between April 11th & May 26th.

However, as the race got closer the pace picked up. In a space of 2 weeks, from May 27th to June 9th, 6 of the 9 stories (or 66%) published were on Cantor’s stance on immigration. Immigration related stories had more engagement with the community with a comment count ranging from 146 to 639 comments. The very last post before the elections on June 9th, centered on stopping Cantor to end the amnesty dream of 2014.

The other 3 stories during the same period were Laura Ingraham attending the Brat Rally & her support for Brat. The starting story of Ingraham on Brat is her attending a rally in his support on June 3rd. A follow up story on June 4th was based on the happenings of the rally that was also focused on immigration. An excerpt from the post:

“The rally was dominated by discussion of Cantor's record on immigration, highlighting his support for legislation to grant amnesty to individuals brought to the country illegally as minors and in support of the House GOP's immigration principles that call for legal status, but not citizenship, for millions of illegal aliens.”

The busiest day for Brat on Breitbart was on June 5th, 5 days before the election with 3 stories, 2 of which were on immigration. The third one was an interview of Ingraham talking about her support for Brat, immigration policies & Jeb Bush’s stance on immigration.